Millions Against Monsanto Toronto yesterday’s march…not quite millions but thousands. It started with a Requiem for Bees at Queen’s Park then a march in perfect weather to Christie Pitts Park for the GMO-Free festival where Shiv Chopra, pres. of the Canadian Council on Food Sovereignty and Health was keynote speaker….read more

Dr. Shiv Chopra,  health advocate and whistleblower will be the keynote speaker.

Last Friday an activist friend of mine, Ken Billings, whom most of you have not yet met, invited me to accompany him to a play at the National Art Centre in Ottawa. Produced by a Montreal based company it is about the famous court battle between Monsanto and a Saskatchewan farmer, Percy Schmeiser. Unfortunately, I could not go but Ken did and attended a reception afterwards. Early next morning Ken invited me to a public meeting at which the play-write would explain what motivated her to produce the play just before the matinee show on Saturday. Both of us went. The meeting was attended by about 150 people sat in the foyer outside the theatre. There were three speakers: the play-write, a moderator and a Monsanto representative giving her observations on the “fair and balanced treatment” of both sides, which surprised me, due to conspicuously absent Percy. After listening to the play-write the audience heard the Monsanto rep spoke for about 20 minutes extolling the virtues of Monsanto.
While doing so, she suddenly spotted me and said,

“O, Shiv Chopra”; to which I responded: “Yep, I am the Health Canada scientist who got your rBGH booted out of this country”; and to which she responded, “And I feel sorry for what happened to you afterwards”.
I kept quiet for a better opportunity which came soon afterwards when the moderator opened up the meeting for questions or comments from the audience. Grabbing the moment I stood up, faced the audience and said:

“You just heard Monsanto’s truth. I have my own which is described in this book, CORRUPT TO THE CORE: Memoirs of a Health Canada Whistleblower”.

I flashed the book and sat down. People clapped. I have not yet seen the play. I might do so later this week. It is running for two weeks.

P.S. On our way back home I asked Ken if the play made any reference to how Percy’s wife, Louise, got even with Monsanto following the Supreme Court decision, due to which they lost half a million dollars in defending themselves. He said no. Too bad, I said. Because Louise sued Monsanto for $600.00 in a small claims court for refusing to pull out their GMO canola growing in her kitchen garden. She won. Small justice but, although the Schmeisers lost big money, they had the last laugh at the cost of Monsanto for having to pay $600.00 to them. Too bad, the play-write did not know about this episode or left it out to please Monsanto.

The Five Pillars of Food Safety

It is your sovereign right to eat locally produced safe food without external inputs of hormones, antibiotics, slaughterhouse waste, GMOs, and pesticides.

The World According to Monsanto

GMO's - Your Worst Nightmare from Farming to your Table

Check out our Canadian made organic white t-shirts for purchase. 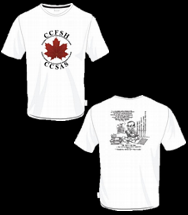