On consent, this Section 28 application is set down for hearing at the Thomas D’Arcy McGee Building, 90 Sparks Street, 10th Floor, Ottawa, Ontario, commencing at 9:30 a.m., on Wednesday, September 6, 2017, for a duration not to exceed three hours.
_____

On September 6 Dr. Chopra, microbiologist and former regulator with the Bureau of Veterinary Drugs (BVD) at Health Canada will find out if he has his job back.

Thirteen years ago Chopra was fired for insubordination along with two other scientists, Drs. Margaret Haydon and Gerard Lambert.

The offence? Speaking out publicly about how alleged management corruption at Health Canada compromised the safety of the Canadian food supply.

In 2004, Dr. Chopra and his colleagues, Drs. Haydon and Lambert, were terminated on the same day for essentially the same reasons. The terminations followed other disciplinary actions taken against them. With the support of their union, Professional Institute of the Public Service of Canada (PIPSC), all of the disciplinary actions were grieved and David Yazbeck (Raven, Cameron, Ballantine & Yazbeck) was retained to represent them. The hearing of the seven grievances proceeded over 150 days and took over five years to complete. In some cases the grievers, particularly Dr. Chopra were submitted to intensive and exhaustive cross-examination lasting many weeks. In 2011 the adjudicator upheld the grievance of Dr. Lambert resulting in him being reinstated. The grievances of Drs. Chopra and Hayden were dismissed.

Yazbeck’s firm commenced judicial review against this decision. In 2014 the Federal Court set aside certain aspects of the decision and ordered a re-hearing in order to remedy the legal deficiencies identified. Following that hearing, the adjudicator allowed Dr. Hayden’s termination grievance with the result that she is now entitled to be re-instated. The adjudicator allowed one of Dr. Chopra’s grievances against a lengthy suspension that had been imposed on him, but the adjudicator refused to allow Dr. Chopra’s termination grievance.

It is the view of Chopra’s counsel “that the adjudicator failed to follow the principles of progressive discipline when he allowed Dr. Chopra’s grievance against a 20-day suspension but failed to allow the grievance in respect to termination. This is because the termination was based on prior discipline including the 20-day suspension. As a result we have commenced an appeal for judicial review in the federal court of appeal.” (To be heard on Sept. 6)

Dr. Chopra’s campaign against government wrongdoing has been well-publicized and documented including in his 2009 autobiographical work, Corrupt to the Core : Memoirs of a Health Canada Whistleblower.

In the book Chopra names names as he unpacks the history of systemic pressure by Health Canada managers and industry lobbyists on BVD regulators to pass drugs of questionable safety.

On his many speaking engagements Dr. Chopra reminds audiences that Monsanto insisted on market approval by reminding Health Canada that its U.S. counterpart, the Food and Drug Administration (FDA) found Monsanto’s bovine growth hormone to be safe.

Harmonizing Canadian and American food policies writes Chopra in Corrupt to the Core started with the Reagan-Mulroney Shamrock Summit of 1985 in Quebec City announcing the first NAFTA trade agreement. “Everything was on the table,” writes Chopra. “The underlying message of those sound bites was that they were effectively constructing a policy of deregulation of drugs, foods, medical devices, pesticides, all kinds of products of questionable safety.”

The refusal of BVD regulators to be coerced by Health Canada managers to approve products of questionable safety for licensing and the resulting tension caught the attention of the Senate Committee on Agriculture and Forestry.

In 1998 Chopra, Hayden and Lambert were subpoenaed to testify before the Senate Committee on Agriculture and Forestry. University of Vermont lecturer Brian Tokar’s collection of international essays on GE, Redesigning Life? : The Worldwide Challenge to Genetic Engineering (McGill Queens University Press 2001) provides context:

The Senate of Canada Hears from the Scientists

In May 1998 the Senate of Canada unanimously passed a motion urging the government to defer licensing of rBGH until long-term risks to human health were determined. A month later the Senate Committee on Agriculture and Forestry began hearings into rBGH. Two senators had heard of a report within Health Canada that assessed the status of the rBGH review, but Health Canada officials provided the Committee with only a heavily censored version of a Gaps Analysis Report – until the full report found its way onto the web site of the National Farmers Union. The details of the report focused the Senators’ questions on the human health risks of rBGH as well as the conduct of Health Canada managers.

At the core of the Gaps Report was the analysis of Monsanto’s short-term toxicology study, a ninety day test on just thirty rats. The study showed that orally administered rBGH was absorbed into the bloodstream with adverse effects. The results of Monsanto’s test had never been published, nor made publicly available.* (ed.: the human safety data was kept under lock and key by a Health Canada file manager.)

Dr. Chopra and the three other authors of the Gaps Analysis Report concluded “the nature of the product (being a hormone) and its chemistry should have prompted a more exhaustive and longer toxicological studies in laboratory animals,” and that “both procedural data gaps were found which fail to properly address the human safety requirements of this drug under the Food and Drugs Act and Regulations.”
With the Gaps Analysis in hand and no satisfactory response from Monsanto, the Senate Committee recommended that the company conduct long-term human health studies.

The Canadian Health Coalition testified that “a growing body of evidence suggests that senior managers in Health Canada have implemented a biased mandate which serves the interests of industry instead of the public interest. All the evidence shows that industry is the client.”

After the hearings the Senate Committee on Agriculture made the following recommendations:

3. The Committee, having heard the suggestion of some witnesses, recommends that the government conduct an evaluation of Health Canada’s drug approval process to ensure that it fully safeguards human and animal health and safety. This evaluation should be undertaken by independent experts, either in conjunction with any follow-up activities of the Auditor General of Canada regarding the Health Protection Branch or subject to review by the Auditor General (page 13).

4. The Committee recommends that no Notice of Compliance be issued for rBST until the manufacturer submits the long-term studies identified by Health Canada’s rBST internal review team as data missing from its submission and until a review of those studies more precisely determines any risks to human safety.

5. The Committee recommends that Health Canada ask that the study requested by the evaluators of the former Central Nervous System/Endocrine/Antiparasitic Division be conducted and submitted in order to meet the requirement of section C.08.004.(2) of the Food and Drug Regulations.

6. The Committee recommends that once human and animal health and safety are assured, the government establish an ongoing mechanism that would stimulate public discussion on economic, trade, social, ethical and other considerations related to drugs and medical devices that are being considered by Health Canada. This mechanism should involve the Canadian Food Inspection Agency where relevant, and may be one outcome of the Health Protection Branch’s Transition initiative.

7. The Committee recommends that Health Canada officials appear before the Standing Senate Committee on Agriculture and Forestry no later than June 1999 to provide information about the initiatives undertaken to resolve the management problems identified in this report.

8. The Committee recommends that any federal government department asked for information by a parliamentary committee fulfill that request completely and as expeditiously as possible. Information that the department believes to be proprietary should be presented to committees in camera, with a rationale for maintaining confidentiality.

9. The Committee recommends that Health Canada, and in particular the Health Protection Branch, explore means by which ongoing consultation with the public, and information dissemination to it, can continue following the Transition initiative.

None of these recommendations were followed through and acted on by Health Canada.

None of the Health Canada ‘management problems’ were resolved, no managers were held accountable.

As parliamentary witnesses Chopra, Hayden and Lambert were promised immunity from reprisals by the Senate Committee on Agriculture and Forestry. In fact, all three scientists faced a series of retaliations and disciplinary actions after their testimony.

What is at stake for Dr. Chopra is his reinstatement and vindication; and that it was not only his right to blow the whistle on government wrong-doing but that it was his duty.

Having submitted documented evidence of wrongdoing to successive Public Sector Integrity Commissioners Chopra, Hayden and Lambert never had their allegations that Health Canada breached the Food and Drugs Act, investigated.

Health Canada’s “biased mandate serving the interests of industry instead of the public interest” continues under the current Liberal government.

> Values and Ethics Code for the Public Sector:
http://www.tbs-sct.gc.ca/pol/doc-eng.aspx?id=25049 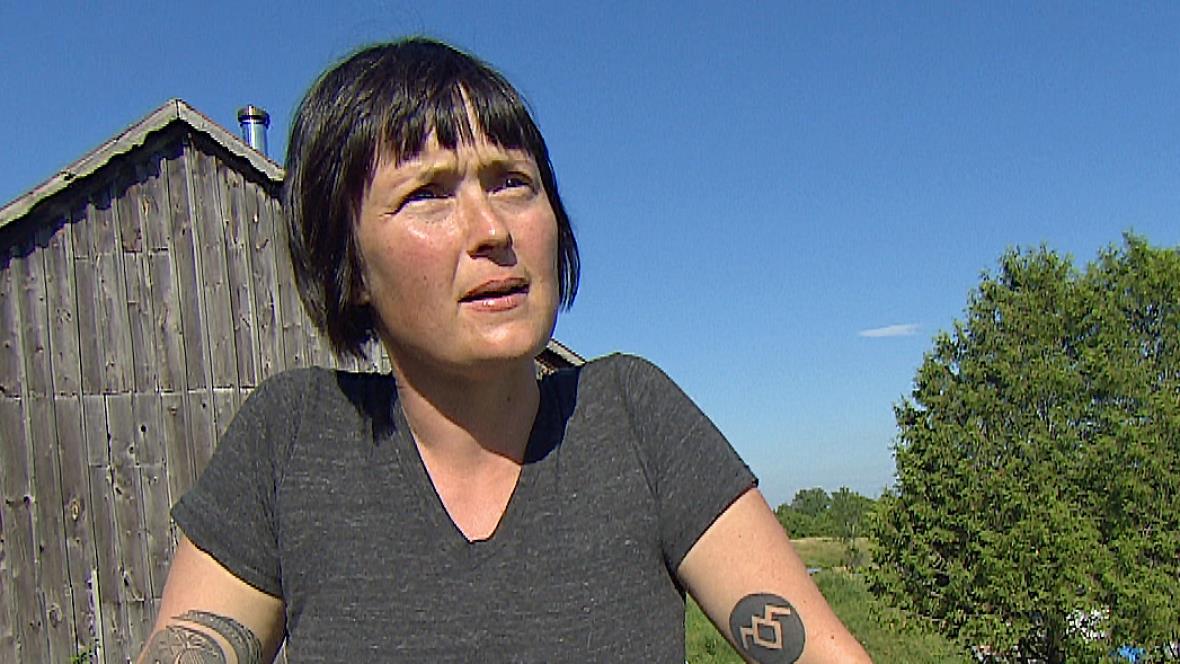 'People are being duped': CBC exposes homegrown lies at farmers markets
Some farmers market vendors push bogus stories to consumers looking for fresh local fruits and veggies — and Marketplace has the hidden camera footage to prove it.
cbc.ca
14    View on Facebook
Canadian Council on Food Sovereignty and HealthSaturday, September 23rd, 2017 at 8:41am
#STOPISDS On the Hill: #TheCouncilofCanadians action against Investor State Dispute Settlement. Through ISDS corporations can sue governments whose regulatory policies interfere with corporate profits. Under NAFTA Canada is the most sued country ($200 million) Here's how it works : https://www.commondreams.org/…/naftas-isds-why-canada-one-m…
Thanks to #TheCouncilofCanadians for not taking the pedal off the metal in this fight. If Canadian independence and sovereignty is important to you and if you want a made in Canada food system learn more and make some noise. Contact #Trudeau, #ChrystiaFreeland and your MP about how ISDS in trade agreements strips away sovereignty including food sovereignty and destroys democracy. 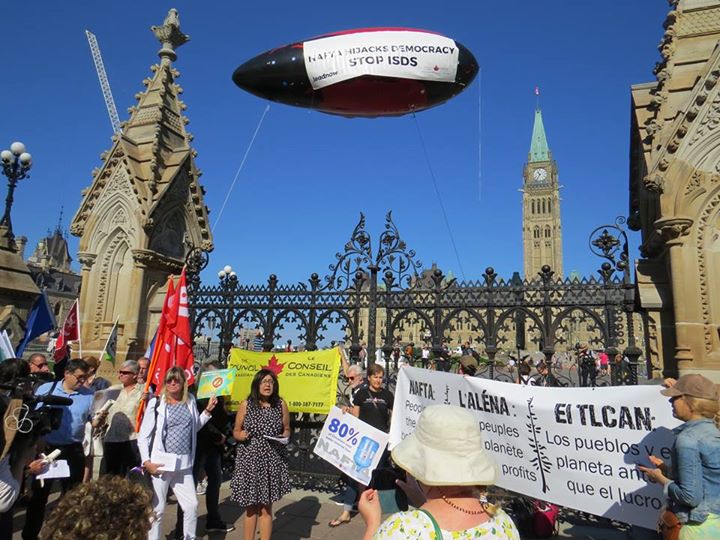 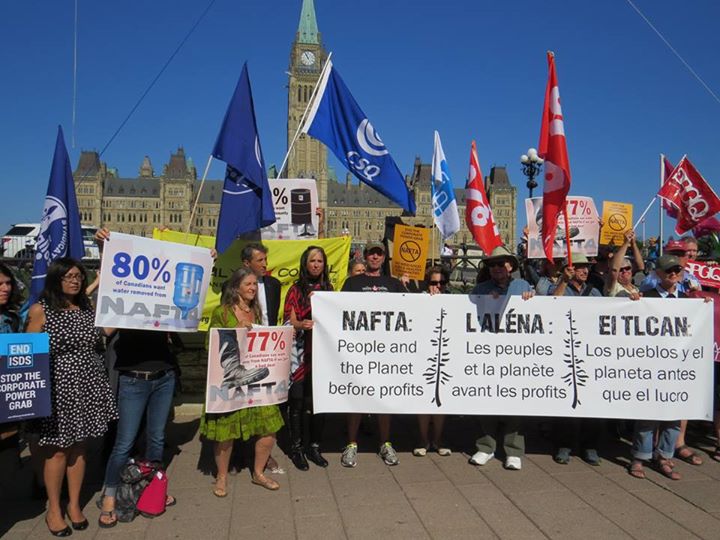 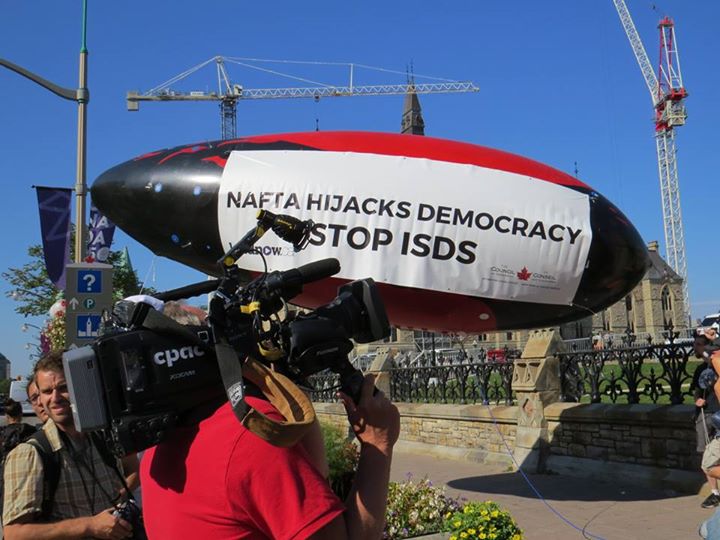